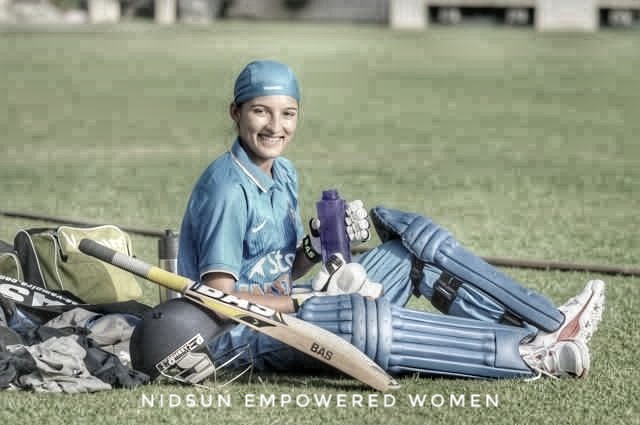 When we think of games in India we think cricket <3 did you know Indian Women’s Team aka Women in Blue rank among Top 10 in the world (currently Ranked 5), today we’ll talk about one such amazing Woman in Blue.

Meet Ms. Sushma Verma, this energetic, super cool and sweetest girl is not just talented but also a complete down to earth sweetheart <3 Like completely a girl next door but a kick ass one. She’s the only one from her state (Male / Female) to be a part of Team Blue. This Super awesome chika is Wicket Keeper and right handed batswoman.

Let’s ask her about her experience

We would like to know what made you choose the field you did and why ?

There was a phase in my life where I had no idea where I’m going to land professionally, although I have been doing well in Volley Ball, Handball and Badminton but I needed something stable.

In the meantime, HPCA was about to start it’s very own residential academy for under19 girls and when I saw the advertisement for the trials I decided to give it a shot. I was only a gully cricketer but enthusiastic enough to learn the game.

And when I got through the trials and made my way to the academy  I never looked back and  never had any second thoughts. I gave my all to the game!

What all challenges did you face in realizing your dreams, who became your backbone in times of a fall ?

Starting a game at the age of 17 was a challenge in itself. My team mates already had a hold on basics but I was completely raw. But thankfully we had a great Coach Mr. Pawan Sen and he always showed faith in my talent and hardworking. Of course the support from My family was immense but having a great coach made all the difference in me.

What message would you like to give to other women out there trying to make their own dreams come true ?

It doesn’t matter whether you are an Amateur or A professional there is no substitute for hardwork. Following a particular routine does wonders and most importantly you should have faith in your abilities.

Thank you Sush ! For inspiring, motivating and making us believe in ourselves more. Keep shining and reaching new heights , we at NidSun wish you the very best in Life .

Healthy Cooking Recipes
Spice Up your Tea : How to make Chai Masala at home

Sunday by appointment only